Sticking To Your Resolutions In The New Year 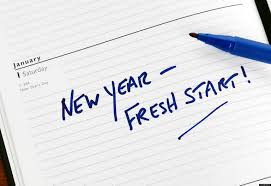 Almost everyone makes a New Year’s resolution at some point or another in their lives. It represents a fresh new start that can allow you to forget about your past mistakes and start over with a clear conscience. Some people can easily stick to the new changes and some have a tougher time following through with it. See even though the New Year represents a new beginning, old habits die-hard and it can be more challenging than you think to just cut them out cold turkey. So I decided to give you a couple tips for sticking to your resolutions, or at least making them easier to abide by.

Start out small. The most common mistake people make is doing too much at once. If you body or mind is used to doing something, or not doing something in some cases, you are going to struggle to keep up the better habits. For example, if you never exercised and constantly ate foods that were unhealthy, cutting them out completely and saying you will go to the gym 7 days a week is a resolution that is hard to believe. Of course, you might follow your resolution for a week straight but I guarantee that you will slack off the gym and grab some chips eventually. The best way to honor your changes is to start out a little at a time and train your body to want to be better. Work your way up; this will allow you to stay consistent longer and eventually you will forget what being a couch potato was really like.

Change one thing at a time. The more you try to change at once, the harder it is going to be. Just like I said before, starting out small and working your way up is key. Breaking several bad habits all at once takes true dedication and determination. I’m not saying you aren’t either of those, but the odds of you sticking to every change are very slim. Another reason to just change one thing at a time is because if you end up not sticking to all of the changes you made, you will get discouraged easier and that will have a negative effect on the changes that you are sticking to. When you continue with positive changes and are successful at them, you will want to add more positive changes.

Always ask for support from your family and friends. When you have a strong support group backing your changes, you are much more likely to follow through with them. It seems like when you have other people rooting for you, you tend to try harder because you don’t want to disappoint the people who believe in you. Sometimes your support system can believe in you more than you believe in yourself. You can also help other by supporting their changes and helping them stay on track.

Stick to your New Year’s resolutions and make the changes necessary to live a better lifestyle. It can be hard, but it is more than possible. Think positive, do positive, and be positive. Have a great New Year!!